The things you find when you're not looking...

So, I'm driving through $SmallTown Nebraska today. Don't ask.. okay, you can ask, but I'm not explaining why.  And right smack dab on my route south is a gun and pawn shop.  "Kismet?", thinks I. So, I stop and skip on in. I'm still trying to find ammo for my Springfield Trapdoor and I'm having an extraordinary lack of luck in that department.

Other than on guy in North Dakota who's convinced that ALL .45-70Gov is low pressure. Because, you know, it's a hunting round.

Yeah, I'm still trying to figure that one out too.

Not wanting to blow a 135 year old gun up in my face, I told the guy he was flat wrong.  I think those were my exact words too.  That felt sort of good and liberating.  Ya'know?

Anyway, so I saunter up to the ammo case below a rack of consignment guns in the pawn shop and the owner (I assume) greeted me and asked if he could help.  Told him I was looking for ammo. He asked, .22? And we both had a little chuckle over that one.  Then I told him I was actually looking for .45-70Gov for a trapdoor.  He said the only .45-70 he has was a box of extreme and he pointed down to the bottom shelf.

Low and behold, what is sitting under it, but this. 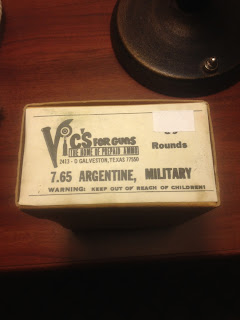 Now, the box is slightly yellowed like it's been on the shelf for a while and I couldn't remember how rare or common or easy or hard to find 7.65 Argentine is. So, after a couple of quick calls to a couple of my guys...

Yes, I have guys, thanks Lawdog and NFO, to see if anyone we knew had anything to use this, I bought it on principle.

So, I've got a box of 7.65 Argentine. Possibly rare, possibly not. possibly old, possibly not.  Anyone need it? I'll trade you straight up round for round for .45-70Gov. I think Remington make a low pressure black powder safe round in .405gr.

>Did I forget to mention that?

Yes. You also forgot to mention the caliber.

These things *are* important you know?

I can't add anything to the discussion of 7.65 Argentine, but I do have fond memories of shooting my father's Savage Model 99 back when I was a teenager. That was the first time I had ever seen a rotating magazine, and combined with the lever action, I thought it was all kinds of cool. I think it was the first time I ever saw a tang sight as well. I want to say that one was in .243 Winchester.

7.65 Argentine is a great cartridge. I have a couple of rifles in that caliber, a sporterized model 1891 and a later (m1919?) cavalry carbine. Very accurate cartridge with moderate blast and recoil, and I have found it to be a good whitetail deer round. Deer are poor readers, and don't know the cartridge is obsolete. My '91 has the nicest French walnut stock I've seen. Sadly, I've no sedate .45-70 ammo to trade.