Last weekend I was accused of being a gear-do.  Now, since I'm always on a limited budget and thus I have to be careful about what I get and why, I was a bit surprised, to say the least.  I'm not one to rush out and get the latest doodad or gizmo just because.  Well, aside from the latest AR build that is.  But in my defense, that build took more than a year to finish and on an AR, "just because" is a valid enough reason.
But since I'm labeled as one, I thought I aught to do a gear review.  In for a penny, in for a pound.  Or maybe, damned if I do, damned if I don't would be a better one.  Anyway, here goes. My first gear review.

For my first gear review I'm going to review a rifle carrying case. After the latest slew of builds I was left with two rifles without a carrying case.


The two on the right. 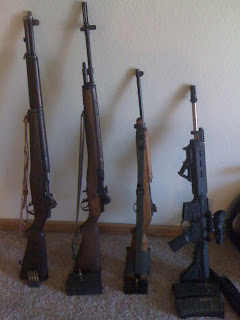 My first thought was, "Cool, two carbines. I'll get a double rifle case.".  The more I thought about it though, the less the idea appealed to me. Because I would only be carrying both rifles at the same time on very few occasions, namely Blogorado and events like that.  The M1 Carbine just wont get shot that often.  The occasional range trip really.﻿  It's not going to be a hunting rifle like the AR or the M14 are.  Also, my rifle bags tend to be bulky for whatever reasons, I figured I didn't want to make one doubly so.
So, I sat down and mentally listed what I wanted in a carbine rifle case.  Since most of my ready range stuff had migrated to a separate range bag, I decided I didn't need a case that could carry everything for a trip to the range.  That cut down on size.  I wanted something that I could carry around easily.  By that I mean in and out of the Jeep without having to fold the back down.  I also wanted something that didn't scream rifle.  So, I had a list of sorts.  Something discrete, with a shoulder strap or straps, needn't carry more than the rifle and maybe a couple of mags,
So, I went hunting and found this. 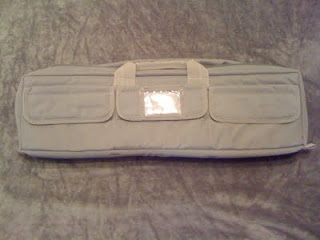 It's available at Cheaper Than Dirt.  It's called the covert carbine discreet rifle case.  Which aside from being named by the Departmental Office of Redundancy Department, really fit the criteria I had in mind.
It doesn't scream rifle. It does scream equipment, but unless you're a gunnie, you won't immediately think rifle.  It holds the AR, in a broken down form, and two mags quite nicely.  Has carrying handles or a shoulder sling that can be tucked into a pocket in the back, and three pockets on the front for other items.
See, it can fit a 16" barreled AR Carbine plus optic and a couple mags with no problem. 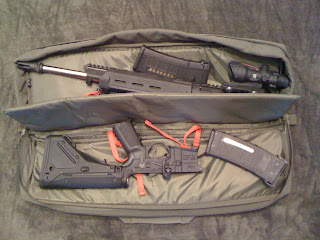 Granted with the Trijicon on it, it has to fit crosswise, but that's just the way the optic is mounted.  You could just as easily remove the optic.  Everything will still fit in it.
Things I like about this.  Size for one.  It's easy enough to move it in and out of the Jeep without having to do any fancy maneuvers. The center padded divider.  Your rifle isn't going to beat itself up when it's broken down and in the bag. In fact the padding all the way around this bag is nice for protection. The carry options.  The carry handles are good enough, solidly double stitched. In fact the construction quality of the whole thing looks to be on the better side and I'll keep you up to date on how it holds up to daily use. But the real ace is the shoulder strap. 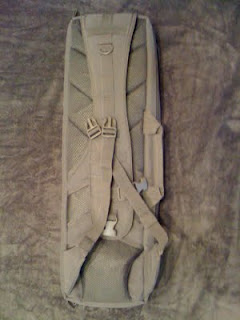 It's nice and wide where it needs to be, namely across the top of the shoulder. So, even as light as this bag is, it wont ever dig into the shoulder if I have to trek it in the bag any length of time. And it's truly ambidextrous.  Either bottom strap can be buckled in to the bottom of the shoulder strap and the other either tucked away or buckled to the side of the strap to add stabilization.  So, you can easily set it up for offside carry if that's your concern.  The back of the bag has plenty of breathable fabric to help keep it comfortable in hot weather or if you're carrying it for extended periods.

Things I don't like.  The red straps on the inside of the bag.  Yes, they would be good for extra security for the rifle upper and lower, but I don't see a need for them really and they just get in the way.  The three front pockets are basically useless with the rifle in the bag.  There's no give to them and with the rifle on the inside anything you put in them is gonna be sticking through the front or poking your rifle in the bag.  If they'd made them with some way to expand along the sides, that would have been better. Maybe a bit more MOLLE webbing.  There's some on the shoulder strap, but that's about it. But then, a lot of that would have defeated the idea behind the whole "discrete" thing.

I've had friends point out that some states get all PSH'y if you have an assembled rifle in your car and this would be perfect for toting your AR to the range and back, rather than that giant blue plastic case that it came in.

Others of you out there are going to scream that the rifle is disassembled and therefore useless if I happen to need it in a hurry.  First off, I'm not a first responder.  I'm probably never going to need the rifle in a hurry like that.  If, by some wild stretch of the imagination, I did end up like that, my situational awareness is shit and I deserve what I get.  Secondly, come on guys, it's two take down pins.  Last night, because I knew you'd make this argument, I had the thing out of the bag, assembled and loaded in under 30 seconds.  In the dark. If you can't slap two take down pins in faster than I did without the blindfold, then you need to review your understanding of the AR platform.

So, there you go Vine, this geardo has done a geardo review for you.  I didn't rush out and buy the shiny, or pick the first thing I saw that had "tactical" in the title.  I figured out what I needed, what I wanted and got the best bag to fit the requirements. Although maybe that makes me a thinking man's geardo. hmm....

That appears to fit the bill nicely. Good choice.

I thought about making a tubular case for myself that would hold a carbine and a short rifle. I may have to get back to that actually.