As most of you have probably seen over at FarmGirl's blog, she's involved herself in a Kinetic/Potential engery experiment last week with an Elk. Well, I've been informed that we have a unique (an unique?) opportunity here. If we can get enough together to beat what her car guy would offer her for salvage (she says between 5 and 6 hundred) we can have ourselves our very own blogorado war machine! We chop off the top, maybe pull the bumper and front fenders off, mount the quad crossbow on a pole behind the front seat.... Something like this maybe? 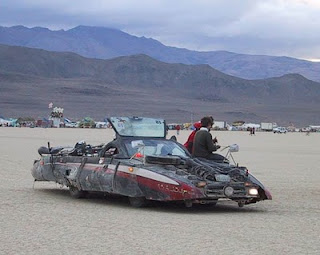 Collander hats are optional. (Don't look at me! I was all for making them required, along with post apocolyptic ass-less chaps.) 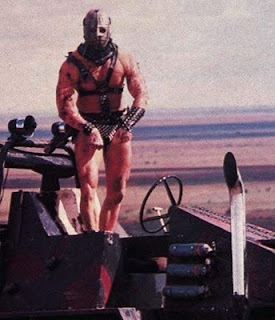 I'm in for a hundred, Farmmom said she'll kick some, Vine said he'd kick in as well.

Please, I'm blegging you, please give to the blogorado war machine fund. ITS FOR THE CHILLUNS!

Actually, just leave a comment on this post and we'll add it up and figure out how to get her the money.

Edit:  I coordinated with FarmGirl and we can use her tip jar.  Just go to FarmGirl's blog, hit the tip jar or click
and enter as much as you want.  Just make sure you put War Machine or "Vine in Ass-less Chaps" as a comment on the tip.  If we hit 1000, we can keep Vine from wearing ass-less chaps and really do a bang up job on the war machine.
Posted by aepilot_jim at 12:39 11 comments:

Here's what happened today. And just to head off the wild rumors, no I did not buy an uzi.

The traffic leaving the airport is always bad. I mean an hour to get 1/2 a mile bad. So, we decided to try going the opposite direction and see if it was any quicker. (In crash investigations, this is referred to as link one in the chain that led to the badness).

It looked like a fairly easy navigation (for Luanda) problem. Basically 3 roads, all listed in yellow on the maps. (That means they're 4 lanes, divided, PAVED and at least marginally free of the pot holes that swallow elephants.) Link 2.

Somewhere before we even got to the second road, we got lost. I mean we probably took the wrong exit out of one of the roundabouts. Link 3. The road very quickly stopped being 4 lanes, stopped being divided. Hell, stopped being paved, and don't even ask about the pot holes.

We found ourselves driving through that unique style of shanty town that is 75% of Luanda. It was a rough neighborhood. So we stopped using any sort of map and just kept prominent landmarks at the same relative bearing to us and followed were most of the traffic was heading. Hey, they've got to be going "out of here" eventually. Link 4.

About half an hour after starting this bounce between ruts and pot holes we come upon a traffic jam. Only about a dozen cars bottle necked at an "intersection". We don't know if someone hit someone, a car broke down or what. But there are cops on the scene. Not a good thing in this country. There is no "To Protect and To Serve" motto on the police cars here. If the cops are here, someone's getting beaten, thrown in jail, sent away, or any combination of the three that the cops take a whim to.

After about 15 minutes, (no time at all in Luanda) the traffic starts moving again. Right past the cops. Now, we're two white guys, in civvies, in a part of town that two white guys in a Hyundai Getz should NOT be in. The traffic snakes it way past the cops and the bigger meaner of the two takes that chance to cut in front of us to get across the dirt rut that's the road. Johnny is sitting next to me saying, "Just go, JUST GO" out of the side of his mouth and I'm doing my damnedest to not look the cop in the eyes while mentally levitating all the other obstacles out of my way. Just as the cop gets to the other side of our car, he looks in, sees said white guys and the following flashes across his face.

At which point I gunned the engine and moved with alacrity away from the scene.

People back in the states laughed when I told them that I keep a bunch of hundred dollar bills in my wallet as “Uzi Money”. (No, I’m not gonna tell you exactly how much, but there are more than 3 figures to the left of the decimal point.) When someone sticks an uzi in my face on this continent I’m gonna shove hundreds at him till he goes away. That is what uzi money is.
Posted by aepilot_jim at 15:47 1 comment:

Email ThisBlogThis!Share to TwitterShare to FacebookShare to Pinterest
Labels: Job, Me me me, Travel

I was at the shopping center in Luanda Sul today and saw this in the bookstore window. I was pretty much gob-smacked. 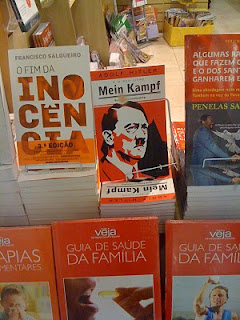 My initial thoughts on Libya...

and the US's involvment in this "Police Action". And they're not happy ones.

I can't help thinking the only reason Obmama did this was so...

2) He's set up the precident that the UN takes precidence over the US in international matters. Now, he only does what the UN wants and not till they want it.

In the Immortal Words of... 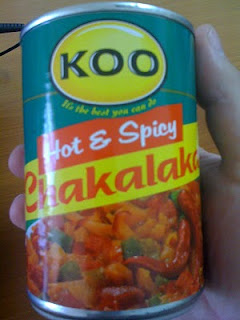 The Cricket World Cup roster is composed entirely of countries that used to be colonies of once Great Britain. And they complain about us calling it the Baseball World Series.

All the sports in the US have "ball" in the name. Baseball, Basketball, Football... None of them do outside of the US. Rugby, Cricket, Soccer... Were they worried we wouldn't know it was a sport if they didn't specifiy the ball? (While I'm all for the name Handegg, it just doesn't have the recognition that Football does, no matter how much more accurate and appropriate it is.)

Rugby RAWKS over Handegg, that is all.
Posted by aepilot_jim at 06:44 No comments:

Email ThisBlogThis!Share to TwitterShare to FacebookShare to Pinterest
Labels: Me me me, Opinion, Randomness
Newer Posts Older Posts Home
Subscribe to: Posts (Atom)