Iran and N. Korea are going nuke with delivery systems that can threaten Israel, Europe, Alaska and Hawaii...

Cabinet members who are batty, completely on the fringe or just outright crazy...

But what's at the top of the agenda? Making sure that Chicago get the Olympics.

Way to be commander in chief. Well really he's more like the organizer in over his head.
Posted by aepilot_jim at 23:37 2 comments:

Aside from the fact that this administration has more Czars than any other previous. (It's at 33 right now, with a planned 45.) The big difference between this administration and previous ones is most of these have had NO NADA NONE ZIP NIL NYET ZERO congressional confirmation hearings. Which is funny in a scary sort of way when you figure that then Sen. J. Biden (Ol' Foot-in-Mouth hisself) made a big storm out of that fact under Bush the latter, and even nixed a czar back then because of it. Now he's sort of silent on that fact.

Another example of holding your opponents to a rule book that you can conveniently ignore when it comes your turn. What was that called when we were kids?
Posted by aepilot_jim at 15:50 1 comment:

Yaaarrr, ye scurvy wags. We be knowing the way the seas be blowin on this day. Tighten up ye mainsail, load ye main guns. It be International Talk Like A Pirate Day! There's plunder out there, me buckkos!
Posted by aepilot_jim at 10:54 No comments:

This week, the senate defined what language it's members can use against or about other members of that body or the administration.

Gather your kids around you. Make note of this date in history. We are witnessing the death of free speech in this country. You'll be able to sit in your rocking chair and tell the youngin's you remember when this country was the land of the free.
Posted by aepilot_jim at 02:20 1 comment:

You know, I thought they said that electing the anointed one would silence all the calls that we were a racist society. That really didn't work out the way they said did it.

But aside from that.

Over and over again in the news I hear the call that anyone who opposes anything proposed by this administration is racist. But when asked what is bigoted about their opposition, the accusers point to the president and say, "See, he's black (or 'of color', or African American, or whatever) therefore you're being racists.

So, what is being said is that because he is considered a minority, any time we're not in lockstep with him we're being racist. The accusors can't actually point out anything about the people they're accusing as being racist. They, in fact, have to point to outside criteria and then equate that with the accused. Hey, an example of Reductio Ad Absurdum.

Folks, I've talked about false logic and fallacious arguments before. Can you guess what kind of logic flaw this argument is?

This is a classic example of Ad Hominem (Argument To The Man). Rather than try to support your ideas or attack the others ideas. You instead attack the person. Since, if that person is bad or sick then his/her arguments must be bad or sick as well.

We could turn the argument around for example. As recent polls have shown, 55% of the American people don't like the president's health reform bill. The president is black, therefore 55% of the American people don't like the president and are racists. Put that way, the logic just isn't there. This then becomes an example of Affirming The Consequent. Another fallacious argument. Simply put "if P then Q" is turned around to "Q therefore P". For example, "All people whose surname begins with Mac are of Scottish ancestry. Dougal is of Scottish ancestry. Therefore his surname begins with Mac." But actually his name is Campbell.

The upshot is just because we don't like something that the president has done, is doing or is trying to do, doesn't make us racists.

And for a bit of fun, I could argue that because you're always agreeing with what the president is doing, and you think that anyone who disagrees with him is racist, that you're afraid of disagreeing with him and being thought of as racists, therefore you are racist.

But that's a fallacious argument for a later date.
Posted by aepilot_jim at 19:08 No comments: 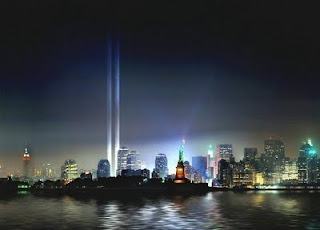 Please take a minute to remember all the men and women who died on this day 8 years ago. In the towers, the pentagon and on the planes. The firemen and police caught in the collapse after responding. The ordinary people who just happened to work in the towers or needed to fly somewhere that day. Everyone.
Let us NOT call this a "Day of Service" as one man would like. Let us NOT belittle the ultimate sacrifice of those who died on that day and after to keep us free just so one man can have his Marxist dream state.
As a great man from Illinois said:

We have come to dedicate a portion of that field, as a final resting place for those who here gave their lives that that nation might live. It is altogether fitting and proper that we should do this.

But, in a larger sense, we cannot dedicate—we cannot consecrate—we cannot hallow—this ground. The brave men, living and dead, who struggled here, have consecrated it, far above our poor power to add or detract.

To attempt to distract us from what happened on this day and try to use our feelings for this day as a way to forget that we are a FREE nation, a FREE people is reprehensible. To attempt to say that this day we should sympathise with those who would do us harm is, quite frankly, insane. We should remember what brought us together as one people.
But I shouldn't be surprised. The party in power has shown over the last 4 and a half years that they will stop at nothing to further their agenda. They have proved and will prove over and over that nothing is beneath them. For them that Machiavelli's statement that the ends justify the means really is the party maxim.
This is a day to remember brave men and women. A day like November 11th, December 7th, the last Monday in May, or July 4th. Or like the excerpt from the speech above, November 19th, 1863.
Posted by aepilot_jim at 16:05 3 comments:

For the non-posting on this blog. I've been entranced by the 0's administration melting down. Seriously. A president's approval rating hasn't fallen this fast since Clinton (the Y Chromosomed one) tried to introduce Hillary-care. Hmm, coincidence?
Posted by aepilot_jim at 23:19 1 comment:

Yeah! I can haz innerwebz again!
Posted by aepilot_jim at 11:18 2 comments: