Czars for everything.
I was going to do one big post for all the things I've seen in the government under the current administration. But it just got to be such a big thing that I'm going to have to split it up. So, here's the first part. I'm not going to say how many parts there are since the groups keep changing as I dig deeper.

There's over 20 positions that have been referred to as czars by the news, or the congresscritters or the executive branch. These are the ones I found, and I didn't have to search that hard. The parenthesis indicate which administration they were created under. Although not necessarily at the request of the then sitting president.

When did Czars become a good thing? The Russian Tsars or (Czars) were despotic enough that they were revolted against, violently deposed and the entire family was executed out in the woods.

The definition of Czar is a person having great power. That and NONE of them were elected. And as such, don't have any accountability to the people. Ours are appointed to the position by the president and only need to answer to him. Does anyone else see something wrong here?

Many of the articles I've read about the current crop of .gov czars talks about the need for them to help the 0 handle the, as one article put it, sprawling size of the government. Well, maybe that should be the clue that the government needs to shrink a bit, or a lot. The constitution sets out the responsibilities of the federal government in a very clear way. Go read it, I'll wait.

Can you point to the anywhere in Articles I, II or III or any of the amendments that say we should have a Pay Czar or a Car Czar or a Bank Bailout Czar? No.

And what about the law of unintended consequences? We've got all these Czars. What's going to stop them from elbowing each other, jockeying for greater positions, more power, etc. When the original supposed need for them goes away, will the position/cabinet/office go away as well. We should ask the TVA about that.

All these Czar really do is create another level of bureaucracy and paperwork and a bigger government. A bigger government not serving the people of this country as our founders intended, but serving one man as any autocracy has.

As a rule of thumb, if every time someone tells the 0 that we need another czar for some problem or issue, he asks which agency already covers it, maybe we could see this gollum that was once our representative government not turn. But who am I kidding, he hasn't seen a new government bureaucracy he didn't like.

Maybe he meant that the 600,000 jobs he would create would be in the government sector.

On a side note, the term was first coined by then Sen. Joe Biden (ol' footinmouth himself) back in 1982. Is there a certain amount of circularity emerging?
Posted by aepilot_jim at 16:03 3 comments:

Thoughts on the "messiah"

All this talk of the "0" being the second coming or the new messiah. I do want to say this.

The "0" and God do have one thing in common. God doesn't have a birth certificate either.

I have this blog rattling around in my head. I just need to organize it. BBL.
Posted by aepilot_jim at 22:15 4 comments:

Email ThisBlogThis!Share to TwitterShare to FacebookShare to Pinterest
Labels: blogging

Does any one know of Letterman ever apologised to Palin's daughter for his "comments" about her?

I'm hard pressed to not go off on how tasteless and completely reprehensible what he calls a joke was. So, I'm going to leave it at that.
Posted by aepilot_jim at 19:36 2 comments: 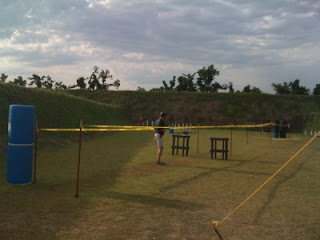 Since those hosts are getting sneaky on us and trading off hosting duties to try to foil our Tuesday night drunk. I'm going to now put up the rules for when the lovely Breda has the cam.

That should do it. Oh, and if Mike dances around topless behind Breda, well you can do what you want, but I doubt we'll ever get that image out of our minds.

I was going to mention David Carradine's passing, but Squeaky and Ahab beat me to it. I will send my sympathies to his family and friends. He was a good and respected actor.

And something everyone should read. Joe Huffman has a quick post up on "reasonable restrictions". That dog just wont hunt, as they say around these parts.

Today I spent the morning helping a friend set up his new reloading and brass supply business. He's also got an air rifle range in his shop. That's just a hoot and a half. He's a dealer for Lyman, RCBS, Lee, as well as most air rifle manufacturers.
Posted by aepilot_jim at 20:56 2 comments:

Email ThisBlogThis!Share to TwitterShare to FacebookShare to Pinterest
Labels: Me me me, teh interwebz

Okay, Sotomayor, "Pro-life" nutjob murders doc in KS, what looks to be a 4 way war over who will be the rabid drooling GOP spokesman-of-doom for the dailykos'ers to rail over, the strange corelation of Clinton supporters and closings of GM dealerships. There's a lot going on out there. What got me this week was....

The big 0 and his wife going to dinner and a play.

Well, let's think about this. After the 0 accidentally the whole economy, he's done what?

Flown a pizza maker and his partner by private jet to meet him in a third city to make around 10-15 pies for him and his staff.

Completely freaked out 80% of the city of New York because the pic of Airforce One flying over Mt. Rushmore wasn't to his liking. You know Mt. Rushmore. That's the sculpture that has a bust of the other famous president from IL. (That may have been a sly move to bolster the psychiatric and psychological practices in the city.)

In his defense, he did scrap the proposed replacement to Marine One. That's the presidential helicopter. That'll save a couple of million... I'd hope.

No, this time the President took Airforce One and went to JFK airport so he and his wife could enjoy a nice 4 star dinner and then catch a play.

(No I will not make a crack about the Ford Theater here.)

In case none of you got that, he flew into JFK. One of the busiest airports in the country. Also a major hub for international flights to Europe. So, standard security practice says that they shut down the airspace around the airport during the approach and arrival as well as departure of the big blue bird. Let's say they did it for the minimum I've ever seen. That would be 15 minutes PRIOR to the start of the arrival and would extend to 15 minutes after departure. Let's assume that JFK is like the other top 20 busiest airports and does an arrival every 2 minutes or so with departures in between. Okay, quick math, 30 minutes plus the let's call it 15 for the arrival, plus another 6 for the approach, plus a quick 5 for departure. That's roughly an hour of time that flights can't use the airport. That means just for the time Airforce One is in the area no less than 30 large jets had to be diverted or hold. Plus while the Prez. is on the property no one is allowed outside. Basically the people on the airport are on lock down. So, no planes are getting serviced. Thus no airplanes are departing. Just thinking about the jet fuel burned at 6 bucks a gallon by holding jumbo jets gets pricey. Stay classy 0.

And the fact that JFK is in the densest Class B airspace in the nation with no less than JFK, La Guardia, Tetterboro, Newark, Farmingday and Linden inside the standard 30 mile prohibited zone that goes up around an airport with Airforce One flying into it. That's 6 airports serving international, commercial, cargo, charter, corporate and general aviation that have operations disrupted because the 0 has been working so hard and wants a break. Spending 3 trillion in only 100 days is rough folks. Let me tell you.

Then let's factor in the cost of Airforce One, and the C-5 that goes with it (someone has to carry the bullet proof Suburbans), plus the chartered jet carrying all the press.

And thats just the tip of the iceberg. There were vettings and security sweeps going on for days before the actual trip. Plus, the great pumpkin know what else.

It's no surprise that the White House press secretary doesn't want to say how much the cost of the 0's little jaunt cost... well, us really. It's taxpayer's money after all. I mean, the 0 wouldn't never dream of taking money out of HIS pocket for anything. They're too deep into ours anyway.

And the press secretary's little comment that the 0 would have loved to have taken a commercial shuttle. Well, I'm pretty sure he was told in no uncertain terms that something like that would never happen while he was in office back in January. And, my personal opinion, he probably never even had that thought cross anywhere near his mind.

Again, opinion here, I wouldn't be surprised if the cost of his date didn't run well into the 6 or 7 figures. But hey, that's not even a drop in the bucket of the trillions (that's millions with a 't') he's spending on his supporters, oops I mean, economic stimulus.

Dinner and a play. It's the little things, really.
Posted by aepilot_jim at 01:11 5 comments: