You know, of all the rifle builds I've done. I still haven't done a free float handguard.
Posted by aepilot_jim at 11:18 2 comments:

So, when you're sitting around, as you do, and you make the comment that you bet you could build an entire AR just from the spare parts in your boxes...

Because when you do, you'll end up with this: 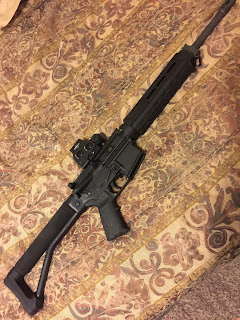 Except you'll realize that you don't have, of all things, trigger guards and a good Magpul pistol grip.  I mean seriously.  How did I not have any trigger guards. I swear I have pulled a bazillion of those things off of builds I've done and where are they? Pistol grips I have. I have more than a dozen stock GI grips, but I really hate those things. The far right is the first shot I took, from the hip by the way, because if it was going to blow up, I'd rather keep my nose.  Aimed shot number one was far lower left. Shot two was upper left. I miscounted and had a bit of trouble feeling the clicks on the EOTech. That little group at the 5 o'clock inside the "10" ring holds shot number 3 and then the other 3 holes in the ten ring were to confirm the zero.

So, the lesson for today is maybe have a better idea of what you've got in your parts bins.

Also, I got another 200 rounds through the AK today while I was there. Had a failure to feed on round three of magazine #2 today. It just didn't strip the round off the top of the mag. Cycled the charging handle and continued to bang away.  That makes 2 malfunction in 1200 rounds, the FTF today and the weird double feed I had in the first 300 rounds.  Not bad for something that I haven't cleaned, only lightly LIGHTLY oiled it after I picked it up from the smiff, and been running el cheapo wolf lacquer coated steel cased milsurp ammo through it.

I stopped there, because it was literally too hot to handle the rifle or mags.

Do you realize how incredible this is? And this isn't even the fastest man made object we've sent out.