So, today. I ran up to my local gun shop to drop off the last of the brass I had ready and put a bit more cash down on the rifle I put on layaway oh so long ago. Anyway, while I was there one of the guys there makes me an offer on the brass I have for sale. Long story short, he bought all I had which immediately went to the rifle.

I brought her home today! Squee!

Springfield M1 Garand. Feb 1943 manufacture according to the serial number. Rebarreled with a Danish barrel and brought back in the 50's by the CMP. All matching serial numbers except for the barrel of course. Even the wood has matching numbers to the rest of the rifle. Very nice. I likey. Now to stock up on it's feed. 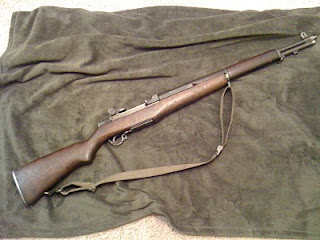 Edit: According to Fulton's Serial number list, it's a Dec. '42 manufacture.

Email ThisBlogThis!Share to TwitterShare to FacebookShare to Pinterest
Labels: Bitterclingy, guns, Me me me, Tehee

So, I'm listening to talk radio on Sunday. It's the usual panel on political commentary that they air. Same time, same stuff. Then they got on to talking about the Tea Party and the tax day Tea Party events. At which point one of the talking voices stated that the Tea Party was mostly made up of "working class people". He went on in this vein for a bit all the while managing to make that label sound like "uneducated, uninformed redneck hick".
Fuck you, idiot radio voice guy.
You know what? I support the Tea Party and it's ideals. I'm for smaller government. I'm for making the "representatives" in DC actually listen to what the vast majority of the people in this country are saying. I'm for getting the government OUT of what it has no right being in in the first place like health care.
You know what else? I have a degree from an institution of "higher" learning. In fact I've got a degree in aerospace engineering. You know what that makes me? Yeap, I'm a fucking rocket scientist, you elitist douche bag! How's that for uneducated, you small minded uninformed hack?
You know what this rocket scientist thinks? I think that what differentiates the Tea Party movement from the rest of the country is the fact that we can fucking think for ourselves. We, unlike what appears to be the majority of the main stream media these days, can take an independent look at the FACTS and come to OUR OWN fucking opinions. We don't need to have an opinion force fed to us. In fact, try to force feed us your opinions and see what happens. I've got a friend in Massachusetts that loves to talk about tar and feathers. Just sayin'. Go on try it, you intellectually stunted radio pol.
So, fuck you talking voice, keep spouting your drivel. You know what the guy on the program immediately after you said, he claimed that the average Tea Partier was college educated, high income, and thus disconnected with what "true" Americans think. Fuck him too. The actual Tea Partier is pretty much any true American, be he or she any race, color, religion, education level, income level, or sexual orientation that believes the fucking government should get the hell out of our lives. Because I can damn sure bet you that we can run our own lives one hell of a lot better then the government thinks it can.
You know what else us Tea Partiers have in common that your "true" Americans don't?
97% of us VOTE!
You fucking addle brained, hydro-cephalic, koolaid drinking, sold out mouth piece for a corrupt regime.
Posted by aepilot_jim at 09:21 9 comments:

The right of the people to keep and bear arms for self-defense and defense of the homeland shall never be infringed, limited, rescinded, interfered with, or prohibited by any decree of law, decision by court, or policy by the executive branch or any of its agencies. And this time, we mean it.
Posted by aepilot_jim at 01:02 3 comments:

Email ThisBlogThis!Share to TwitterShare to FacebookShare to Pinterest
Labels: My bookshelf, Opinion, Randomness

It's all about the warm FEELINGS

Lucky for us the DHS isn't worried about the next Islamo-militant attack, or the invasion by mexican drug cartels across our border. They're are all over the alleged christian militias though. We can sleep safe at night now.
Posted by aepilot_jim at 20:14 No comments:

My foot hurts and I managed to make one of the greatest people I know and nicest person around pissed at me.

Email ThisBlogThis!Share to TwitterShare to FacebookShare to Pinterest
Labels: Me me me
Newer Posts Older Posts Home
Subscribe to: Posts (Atom)