So, a while back a buddy of mine, Spear, and I got to talking about Bug out Bags and what would make good 24, 72 and longer bags.  His idea was to make the 24 hour one a molle vest. Which was an excellent idea by the way.  You'll probably never get separated from it, etc. etc.

Anyway.  I found a great molle vest at a gun show and he said to pick one up for him.  So I did.  I thought it was important that he be able to identify himself too, so I got a chest patch for it.  Just like the police and other LEO's use. 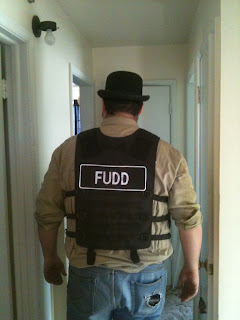 Email ThisBlogThis!Share to TwitterShare to FacebookShare to Pinterest
Labels: Tehee

As some of you might know, and more of you may have guessed, flying charter is really just a sort of taxi service. 99.9% of the passengers are your basic mix of humanity.  No worse or better than everyone else out there.  No one really any more memorable than the last.

Today gave me one of those memorable personages.  No, it's wasn't a TV or movie star.  I haven't flown one yet who'd I'd consider of the caliber of Cary Grant or Jimmy Stewart or Humphrey Bogart.  And these people who are famous for being famous just baffle me.  But they seem to be able to support those half hour "entertainment" shows, so who am I to understand it.

Today, I flew a man that personally had a hand in a large chunk of the major political decisions of the US from the 60's through to today.

Today I flew a man that escaped Nazi Germany with his parents only to serve in the Army from the Battle of the Bulge through to hunting down Nazi's in post WW2 Germany.

Today I flew a man that opened up China, defined détente. and was a proponent of Realpolitik.

Yes, he's a controversial figure. Yes, many may disagree with his decisions and recommendations while in the White House.

But you have to acknowledge that this man has had a major affect on countries and the lives of people all over the planet. Not many people, even those in DC currently, can say that.
Posted by aepilot_jim at 20:54 5 comments: