Email ThisBlogThis!Share to TwitterShare to FacebookShare to Pinterest
Labels: History

Friday I had a little fun at the range.

Email ThisBlogThis!Share to TwitterShare to FacebookShare to Pinterest
Labels: guns, Me me me, teh interwebz

Pretty well sums it up.

Says better than I ever will how angry I was at those douche bags in DC when they stood up and applauded the Mexican presidents chastising Arizona for having the sheer audacity to stand up and say that the US is a sovereign nation and our borders should be inviolate.

I'm buying from Arizona to show my support. Hell, if I could buy their power, I'd snap it up and let LA sit in the dark.
Posted by aepilot_jim at 12:04 2 comments:

No, not that kind of BOB.

As the storms rolled through my city tonight. I was up at the range watching them on the big Teewee and talking to my favorite cat lady on the phone. She casually asked where my bug out bag was. I said it was at home in the closet... right underneath that tornado like radar return... a long ways away from me. At which point she made me aware of how much all my BOB planning was made of fail at that point.

Email ThisBlogThis!Share to TwitterShare to FacebookShare to Pinterest
Labels: Me me me, Tehee

Why don't they understand...

It's not about what you're banning. It's about who get's to choose how I live my life.

Email ThisBlogThis!Share to TwitterShare to FacebookShare to Pinterest
Labels: Me me me, Ramblings

I just decided I spend too much time jumping to conclusions.
Posted by aepilot_jim at 18:19 6 comments:

Guess what arrived today. A bunch of us went in on a group buy from Aero Precision. I got two lowers. One for now, one for later kinda thing, and an upper. 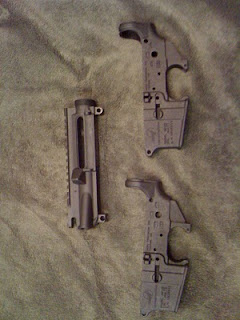 My immediate project is a Carbine length flat top with a piston conversion kit from Adam's Arms and a Trijicon ACOG. I'm getting the barrel from Bravo Company. They have a good cold forge hammered barrel for not a bad price. Rock River's NM two stage trigger and parts kits will finish out the rifle.
The other receiver, I don't know yet. I'm toying with the idea of doing a classic 20" A2. But then Magpul is supposed to be doing a rifle length hand guard and I'd like to do the furniture that way.
Sigh
Decisions, decisions.
Edit: Unix Jedi reminded me of something. This current AR project is all about "because I can". So, before you go all mall ninja on me about "ZOMG! The piston is the shiznitz!", or "Son, that gun was killing commie pinkos with direct impingement when you were still in diapers." Remember, the AR is arguable one of the most customizable rifles on the planet. And this rifle will be customized. So there!
Posted by aepilot_jim at 23:36 1 comment:

Email ThisBlogThis!Share to TwitterShare to FacebookShare to Pinterest
Labels: geekery, guns, Me me me

Or learning what gubmint cheese really tastes like.
I'm listening to morning talk radio and there's a kerfuffle ensuing over the most recent budget proposal by our elitist illustrious mayor.
You see with the economy in the tank, people are spending less and not surprisingly business revenue is down and as a result tax revenue is down. And now the city finds itself in the increasingly common position of not having enough money. Funny how that works.
What's our statist mayor's answer to this dilemma? Why raise taxes of course. It's worked so well before, right? Umm... yeah... And this from the guy who ran on "No New Taxes". I'm beginning to think that when a politician says that he means that everything has had a tax on it at some point in the past and they couldn't think up any new tax ideas. Sort of like movies in Hollywood, or shows on TV.
The new budget is rife with "revenue enhancements". Which is PC speak for tax increases. There's a rant about PC speak, but that's for another time.
Anyway, they've been getting the reactions from many of the city councilors and for the most part they have not been... happy, would be one way to put it.
What's got me going is one of the councilors supporting the budget had a wonderful quote. He said something to the effect that he's all for the revenue enhancements because "... the city has to have a way to pay for the things that the people want".
Umm... No.
Government should be there to arrange those things that individuals can't arrange for themselves, like roads, crime deterrence, fire fighting, water, sewer, basically those things we like to call essential services.
Government is not there to act like the kindly grandma that spoils the kids while the parents are away.
Just because "the people" want it, doesn't mean the government is required to provide it.
Hell, I want a personal 19 year old Swedish massage therapist with at least one Nobel Prize in a hard science. I'm not picky, physics, astronomy, math, any one of those.
The government, in general I think, has lost the plot on what is essential services and what isn't. And as a result we end up with a city that has a city hall budget that tripled between last year and this and at the same time laid off over 200 police and fire. But hey, when your house is burning down, you can rest easy knowing that the Mayor's assistant deputy aide to the floral adjunct designer has his own secretary office manager.
As unpopular as this may sound to those of you with pet government projects, part of the job of a responsible, adult governing body is to know when something isn't affordable or even should be provided by them. This idea should apply to any level of government, from federal down to that Home Owners Association Nazi down the block.
But then I guess people being the way they are, we all love our little empire building.
Posted by aepilot_jim at 08:59 3 comments: