Today, we witnessed the dawning of a new era in politics.

Well, not really. What we saw was the PRESIDENT OF THE UNITED STATES engaging two men from a relatively small community in a conversation. You'd think the man in charge of the most powerful (so far) nation on earth would have something better to do. Like, um, run the country?

Here's my take on this. The "0" is in over his head, he's realizing it, so he's going back to what he has experience in. Namely, community activism.

Here's a man who spent less than 200 days in his senate seat voting "present" before he started running for the oval office. Prior to that the biggest bullet point on his resume was as a community organizer in Chicago.

He's figured out he's over his head. His handlers know that to, so to try to give him some sort of victory in office, no matter how small, they've orchestrated this minor news blurb in a Cambridge Police Blotter into a national news item/photo op.

Okay, let's get constitutional for a bit here. The Constitution (you remember that bit of paper) pretty clearly defines the powers and duties of the office of the president of this country. I just reread that section. I didn't see community organizer there anywhere. But don't take my word for it, read it for yourself. I'll wait.

And even if the incident had required a response from the White House, don't you think that it could have been handled at a lower pay grade than this one? It has that stench of micro-management to me. But I guess will all the czars that the 0 has appointed to run all the other aspects of the golem that we've created that is the federal government, he's pretty much only got this on his honey-do's list.

The paranoid hind-brain of mine keeps knocking me with this little idea too.

If 0bama's press conferences are heavily scripted. And if the media is so in the tank for him that they wouldn't deviate from the script. Who let that question be asked and what are they trying to distract us from?
Posted by aepilot_jim at 21:48 1 comment:

I inherited (insert mess here) from the previous administration.

It's not about me. It's about (insert current legacy media darlings here)

Then ramble for a bit without really explaining anything or understanding anything.

I wonder if I can get a job working for the teleprompter?

Yesterday, almost unremarked, passed the anniversary of the first manned landing on the moon. Truly a momentous thing. I was 4 when it happened. But I still have hazy memories of sitting in the basement of my house watching our black and white TV.

We reached for and caught the stars. Realized our triumph and courage, only to recoil back in fear
Posted by aepilot_jim at 11:38 2 comments:

Stumper of the day.

Can anyone identify this holster. I picked it up today at the Surplus store. It fits my 1911a1 like a dream, but I can't find anything that looks like it on the web. I'm trying to identify era and/or theater. 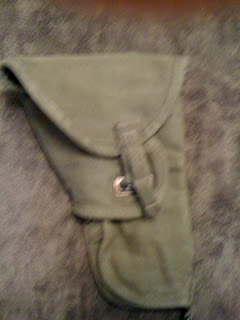 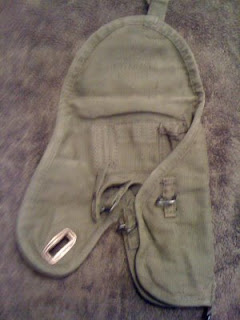 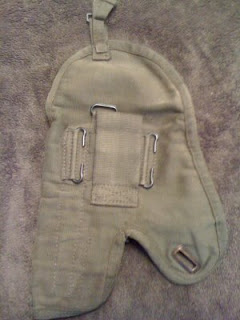 By the way, I picked it up for $15 including the web belt.

A little thing we like to call the Constitution.

Did anyone else notice that when the big 0 signed the arms limitations treaty with Russia, he violated the Constitution? Specifically Article 2 Section 2. But allow me to quote.

But don't take my word, look it up yourself.
Posted by aepilot_jim at 22:19 3 comments:

I think I've mentioned before whats on my reading desk. Usually it's a pile of paperbacks, science fiction or fantasy mostly, waiting to be read or reread. I have a bunch of standards that I like that I try to reread every year or two.

Right now, I've thrown away my always read from the top of the pile rule and started in on Democracy in America by Alexis de Tocqueville. The title is two volumes detailing what this Frenchman found on examining the democratic and republican practices in 1830's America. He came over to this side of the Atlantic ostensibly to study the American penal system. But instead he published a series of books that examined the state of the system of government that our founding fathers had established and had grown over 50 years of peaceful development.

Our country had yet to be tested by the Civil War or any of the world wars that were to follow. Many at the time wondered if this form government and rule of law was strong enough to survive a trial of that magnitude.

Anyway, I'm just starting on these volumes, but one thing caught my attention from his foreword. De Tocqueville writes:

I'm finding in many ways that de Tocqueville's thought and opinions are sort of a precursor to Ayn Rand's Atlas Shrugged. He, much like Ms. Rand, thought that democracy can only last until the people start voting themselves largess's from the government treasury.

Something else that he wrote about in his foreword. He advanced the theory that democracy is the form of governance that all societies move towards. He took France and England from the 11th century through the modern era as his examples. Stating that gradual adoption of the principles of democracy into local and town governments were the natural course.

I'm left wondering, based upon today's societies both here in America and around the world if de Tocqueville might have been a little optimistic there. I see a tendency towards Absolutism rather than democracy as the unpiloted course. And yes, I'm looking at society here in the states.

These are just my initial thoughts on the first few chapters of Alexis de Tocquevill's books. I'll try to update you on what I read and what I think about it as I get farther into them.
Posted by aepilot_jim at 17:13 2 comments:

North Korea and Iran ARE going nuclear. And 0bama wants to dismantle our missle defense.
Posted by aepilot_jim at 23:17 2 comments:

and I still don't have any large pistol primers or CCI #34 primers for my rifle.
Posted by aepilot_jim at 22:59 No comments:

Email ThisBlogThis!Share to TwitterShare to FacebookShare to Pinterest
Labels: guns, Me me me, Weirdness

We the people of the United States,

in order to form a more perfect union,
establish justice,
insure domestic tranquility,
provide for the common defense,
promote the general welfare,
and secure the blessings of liberty to ourselves and our posterity,

do ordain and establish this Constitution for the United States of America.
Posted by aepilot_jim at 23:19 1 comment: