Changes, and not the way we'd want them.

Both Libya's and Egypt's regime changes started as food riots.

Now watch what current gas prices are doing to the price of a gallon of milk.

When gas hit this price at the pumps last time, Bush signed an executive order suspending the moratorium on oil exploration.  And gas prices plummeted to under 2 dollars a gallon in the space of weeks.  Mind you, no actual drilling took place. Just the fact that it could brought price speculation down.  This regime says they can't do anything about it, but they'll form a commission to look in on price gouging by the oil companies.  Seriously?  They banned exploration, banned new drilling, banned just about anything that would make us more energy independent as a nation and when prices do what they will do when that happens, they try to blame someone else.

But, I'm not surprised. This regime believes corporations are evil, that capitalism is evil, that freedom is evil, that being an adult and standing on your own two feet is evil.  This regime would love to see European prices at the pumps here in the states.  It would make their dream socialist state that much closer.

On a side note, have you seen some states are proposing a usage tax on electric and hybrid vehicles to help offset the drop in revenue from sale of gasoline?

How's that hopey changey thing working out for ya?
Posted by aepilot_jim at 18:15 3 comments:

My new Easter tradition will be shooting an M1 Thompson.  Now if I could only afford one... or to shoot it....

Sorry, no pics from today's range visit.  But trust me, shooting the Thompson was F.U.N.!

On Tuesday I fly back to darkest dark continent to start making buckets of money again.  If you haven't guessed.  I'm squeezing in all the shooting I can because I'm looking at a long dry spell ahead.
Posted by aepilot_jim at 22:11 No comments:

Email ThisBlogThis!Share to TwitterShare to FacebookShare to Pinterest
Labels: guns, Holidays, Me me me

Since everyone seems to think that that's what it's name is. Or at least that what they've called it when they see it for the first time. I'm naming the new rifle:

As most of you know by now. I bought a new rifle from Sal’s Funstore back on the 7th. 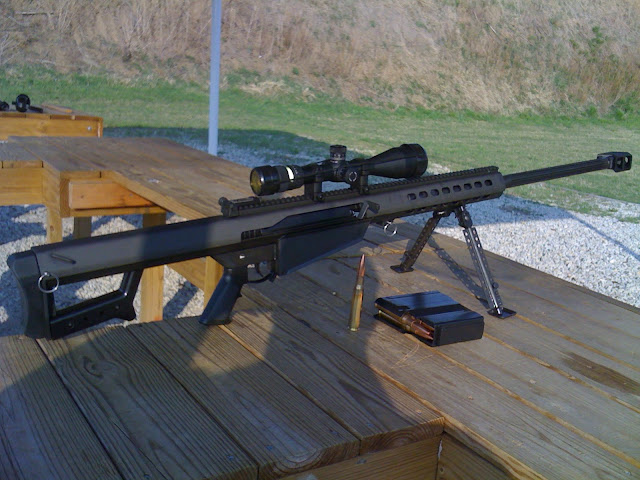 Anyway, I picked up 20 rounds of Barrett’s 660gr M33 for zeroing and another 10 rounds of American Eagle XM33c for fun and went to the range yesterday.

I had crunched some numbers on a ballistics calculator and while Barrett recommends a 100 yd. zero. I opted for a 250 yd zero this time. For two reasons. One, the bullet drop beyond 250 basically lined up with the mildots on the reticle. First dot down was almost 400, next was about 500, etc. With the top of the bottom post at 800. This would make hold over easier to judge on quick shots. And two, I could set the zeroing target up at 50 yds and that would correspond to 250. Since the longest range I have is 300 yds and the 200 yd berm would have been in the way of an actual 250 yd shot, this seemed like the best solution.

It took 4 rounds to get it onto paper and then another 7 to zero and confirm. (Both Geoff and I shot confirming shots. By the way, I want to thank Geoff for the excellent pics of the rifle. Most of the pics here are his doing.) 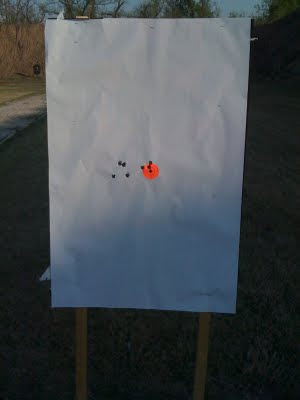 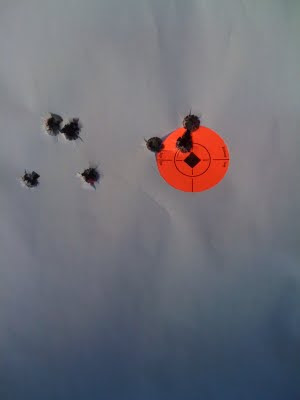 After that, we were joined by Levi, the range master, and we moved down the bays to one that had some cars sitting on it. I had to see what shooting through the engine block on a car would do. The three fresh holes in front of the tire are mine. 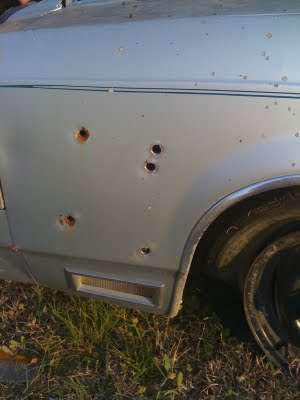 And the gigantic exit hole in the same position on the other side too. 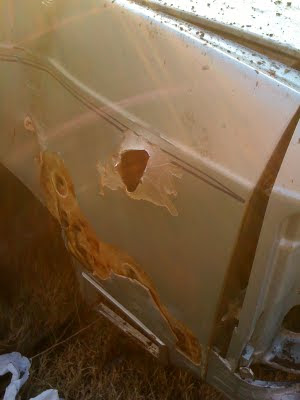 I would have taken pics of the giant divot in the berm behind the car, but we were laughing too hard at the time to remember. Come on, that was just fun! So, yes. The .50BMG will shoot through the engine block of a car, no worries.

After that we moved to the 300 yd berm and knocked over some steel plates there. I mean literally knocked them over. I guess even at 300 yds there’s a butt load (that’s the technical term for ‘a lot’) of kinetic energy left in a .50BMG bullet. 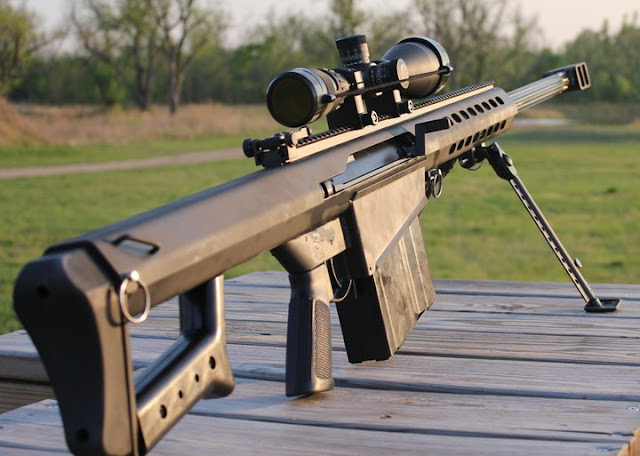 This is an artsy shot by Geoff. 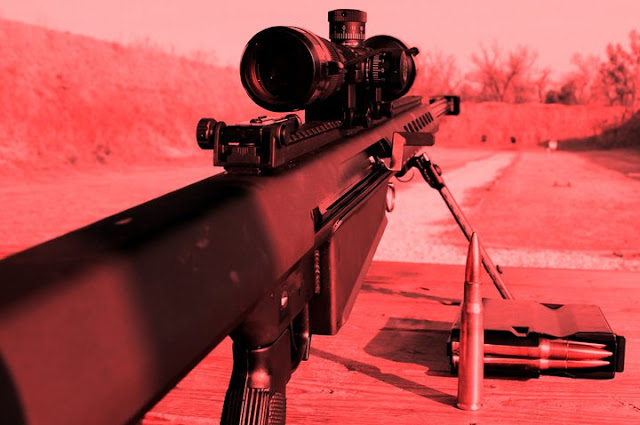 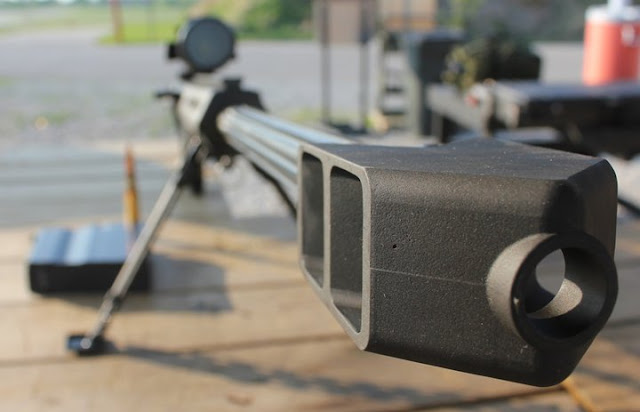 Email ThisBlogThis!Share to TwitterShare to FacebookShare to Pinterest
Labels: defense, geekery, guns, Me me me

At the range sighting in the new rifle. Range report to follow.

I'm finally home again. I love all y'all dearly, but damn, that was too much time driving.  Next time y'all can come here.

Email ThisBlogThis!Share to TwitterShare to FacebookShare to Pinterest
Labels: Me me me, Travel

Just so you all don't think I fell off the face of the earth again and landed in Africa. I'm still in the US. I'm up in Jayhawk territory visiting friends from college with their 3 grade school aged boys. I still haven't gotten to the range to do a sighting or range report on the new OMGBFR.  But rest assured, I'm as anxious as the rest of you to do it.  It should be sunday or monday when it happens.

Email ThisBlogThis!Share to TwitterShare to FacebookShare to Pinterest
Labels: guns, Holidays, Me me me, Travel