I saw this on my Fox News feed.

And all I could see was the police line up for that.

"Don't worry ma'am, they're behind a two way mirror and can't see you."
"Number three, step forward and say, 'Hey Booboo, let's get us some pik-a-nik baskets!'"
"ROWRRRRRRRrrrrrGROWRRRRrrrrr"
< sob >; "That's him, officer!"

I'm sending this one out to my CO homey, Salamander. A known Ursinophiliac.  Don't try to deny it.

Edit:  Sorry, the above clicky-linky to Sal's blog is the old blog, you can currently find him terrorizing the bears at http://armedandamphibious.wordpress.com/.  Sorry for the mix up.

Edit edit:  After I published this again, I realized that maybe using the word "terrorizing" will pop me up on a couple of gub'mint three letter department's radars.  Oh well, another day, another watch list.
Posted by aepilot_jim at 02:28 5 comments:

I haven't mentioned politics in a while.

I suppose there are a few reasons for that.  But I have to say.

The only job I want the great anointed one to talk about is he won't be seeking a second term for the one he has.
Posted by aepilot_jim at 00:11 1 comment:

My commemoration of the fudamentalist islamic terrorist attacks of 9/11 was to go to the range today.  I skipped the rally across from the Mosque in town and decided that punching holes in paper would do for me.

I packed the Barrett, an ammo can of .50BMG and the usual range stuff and set up for some long range shots.  It's was slightly longer than 500 meters when we had everything set up.

I'm disappointed in myself.  My zero is way off.  5 rounds and only 1 hit and I was holding a mildot and a quarter left to hit. I'll go back out next weekend and sit down and get that zero perfect.

The other thing I was commemorating today was the death of my friend Chris Horton, late of the 45th Inf., Oklahoma National Guard.  He was one of the men killed in a fire fight in Iraq on Friday.  Please send out a prayer for him. He's survived by his wife and family.
Posted by aepilot_jim at 21:46 3 comments:

Yes, I am.  Don't act so shocked.  Someone asked to see a pic of the zeroing sticker on my Garand.  So, here's a quick pic of it.  Sorry for the quality, but I'm using my crappy phone camera and I was trying to balance the stock, hold the phone and snap the pic at the same time.  I needed an extra hand. Anyway, here ya go. 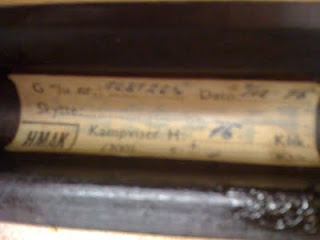 As you can see, it's in some sort of modern Elvish.  At least I think that's what they speak over there in Dane-land.

They said the sight should be set for 15 clicks up from bottom and 1 click right of center.  And that was spot on.  I still don't know why the Danes gave up such a good rifle. But I want to thank them for it.

Thank you, Dane-land type peoples. It's an excellent rifle and I'll give it a good home.
Posted by aepilot_jim at 17:25 3 comments:

Email ThisBlogThis!Share to TwitterShare to FacebookShare to Pinterest
Labels: guns, History, Me me me

This time with pics!

Since hunting season is quickly approaching, I thought it might be a good idea to make sure that I can actually, you know, hit stuff with my rifles.  And since every other hunter and his kin are probably having the same idea, I figured now would be a good time to get out there.  Early enough that maybe only the black powder guys are out, late enough that I'm not doing it in OMGLOLWTF heat.

Nice day today, upper 70's to lower 80's with a good breeze straight down the range.

I loaded up the Garand, the M14 and the AR.  Because I just wasn't sure what I'd be hunting and with what.  It was actually a quick rezeroing session today.  I'd had the Garand looked at by an expert since I'd shot it last and he'd moved the rear sight around.  But the Danes were nice enough to leave their zeroing sticker on the inside of the stock, so I used that and I figured I'd see what that did for me.  The M14 really hadn't been messed with too much and the AR had only had a rough zero from when I first shot it right after the build. 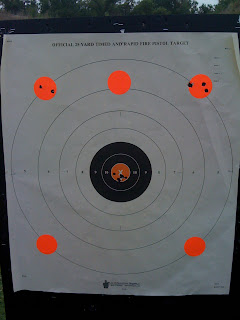 Like I said, quick day.  The upper left is the Garand using the Danes zero info.  I guess they do know how to shoot over there.  Or at least some of them do. The upper right is the M14.  Both of them using iron sights. Not bad, if I do say so myself.  Center is the AR using a 4x ACOG.

Here's a close up: 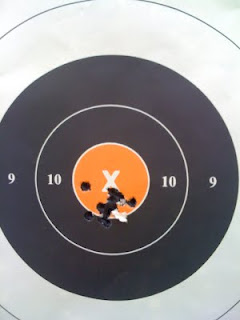 I then finished the clip or mags on a half size steel torso at 100m.  Went 6/6 with the Garand, 17/17 with the M14, and 15/20 with the AR.  I think I was sighting wrong with the ACOG.  I was aiming between the shoulders and hitting head shots.  Which makes sense for the trajectory/zero/distance.  I should have aimed at the lower COM and expected shots in the breastbone/heart region. That's why I missed 5 with the AR. That's my story and I'm sticking too it.

Then I had Chicago style pizza at the new place 2 blocks from home.  Yummo.
Posted by aepilot_jim at 16:41 3 comments:

Email ThisBlogThis!Share to TwitterShare to FacebookShare to Pinterest
Labels: Food, guns, Holidays, Me me me

Today is International Bacon Day!
Posted by aepilot_jim at 19:44 1 comment: