You know that Carbine I mentioned the other day....

Went to the gun show today.  Just one of the monthly ones. Nothing special.  Went in looking specifically for M1 Carbines.  There were exactly 3 there. there were 3 others but I don't count Plainfield or Universals as M1Carbines. Yeah, you can call me whatever name you want now.  Any, around the second time through, (yes, it was that small of a show) I found this. 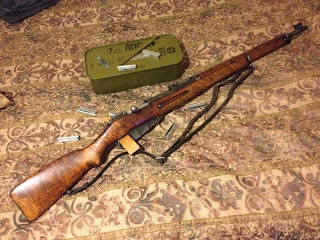 Finish hex receiver Mosin - Nagant. 5 digit serial number.  Has the correct sling according to the seller.  He threw in a slew of stripper clips too.

I almost walked out with 2 instead of 1.

This is my new addition.  While I was at the FFL, I noticed an M1 Carbine up on the wall, Inland receiver and barrel, mix master for the other parts, type 3 barrel band and flat bolt, serial number puts it solidly in the '44-'45 time frame.  They had a price that was a touch too high, I countered and I'm just waiting to here if they'll bite. So there may be new pics soon.  Anyway, this is my new (to me)SMLE No. 4 Mk 1. Born  in '44.  Dragon shaped slippers for scale.
﻿ 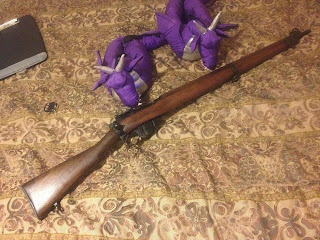 Today is an anniversary. It's an anniversary for 2 events. The one that everyone is focusing on happened 12 years ago and exceeded Pearl Harbor in its death toll. The other was 1 year ago today and only 4 lost their lives.

I don't think the number of lives lost is important to remember.

What I think is important to remember is how each administration handled the events.

G. Bush gave 2 of the best speeches an American president ever has and committed us to catching and punishing those responsible and those who aided them. The administration in office during the event last year spent the time after, lying, hiding, misdirecting, looking for scape goats, and hampering any attempts at justice. 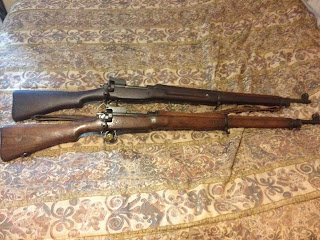 So, as a follow up to the last post. This pic shows the Enfield P14 from the last post's pic and the Eddystone M1917 (top).  Yes Virginia, the 17 is a direct descendant of the P14.  The interesting thing about this system is the cock on close rather than cocking on extraction with the bolt.  So, you're fighting the spring tension in the system to close the bolt.  I'm trying to think of the reasons why for either system.

Anyway, the 17 does fill a gap in my collection.  Yes, I understand that the 17 was really a stop gap rifle as the Krag-Jorgenson was phased out and they couldn't field enough M1903's to equip the AEF as it went off to fight WW1.  But it is the rifle Sgt. York was carrying on the day he earned the MoH. Heck, the P14 was created because the Brits were desperate for long arms to fight the war and anything they could get was used.

Which reminds me. I need to find a nice shootable example of the Lee-Enfield SMLE.  It's interesting to the nerd in me that the MLE was adopted in 1895 through the SMLE which was the standard long arm of the RA into the 50's and 60's while the US Army went from the .30-40 Krag-Jorgenson, the M1903, M1917, M1903a3, M1Garand and finally to the M14 in the same period. What do you think that says?