Just a snippet of a conversation we had:

LD: Yeah, you get inside his OODA loop and it screws him up.
Me to Phlegmmy: OODA Loop, that's another geek thing.
Phlegmmy:  I know what an OODA Loop is.  I've seen Willy Wonka.

Last blogorado, we had problems with a can of Greek .30-06 I'd brought.  It was CMP stuff.  The 192 rounds in enbloc clips that they sell.  We had the same problem using 2 different rifles.  So, the guys in #GBC wanted to see pics to see if maybe it was bad powder from improper storage.  So, I grabbed a clip at random, pulled one of the rounds and took pics.  Here they are. 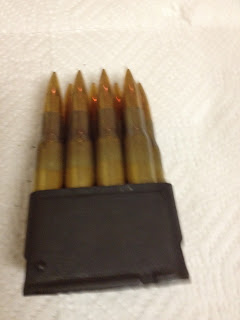 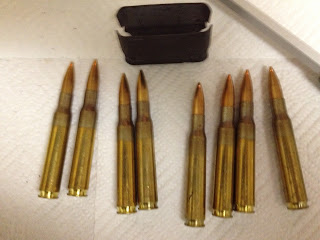 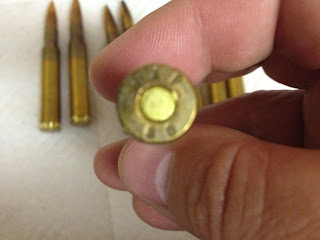 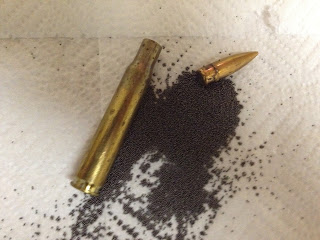 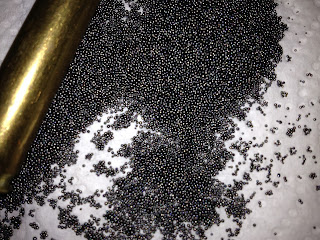 I don't see anything wrong, but then it wasn't happening with every clip, every time.

The big difference today is my phone got stolen while I was out flying.  So, I'm experiencing a little experiment in Keynesian economics.  Since my old old phone had died back in December, I had to play full price for this replacement.  So, $750 bucks there after the case and screen protector.  So, H'Ray for Apple and the case producer and the screen protector maker. They made money. So, Obmama and his Keynesian zombies are applauding.  Except... That $750 had to come from somewhere.  In this case, it's coming straight out of my helicopter training fund.

Basically, that's 2 hours of training that I can't afford to do now.  Which is that much in instruction pay out of my flight instructors pocket, that much in lost fuel sales for both my Jeep, and the helicopter. So, the airport looses out there and the .gov loose out on the lost tax revenue from everything.  That much in rental fees that the flight school looses. Then there's the mechanic at the airport, etc.  The list goes on.

Plus the first thing I did was have both Apple and AT&T wipe that stolen phone.  So, it'll never work again.  And if they change the sim card and try to get Apple to reauthorize it, it'll come up as stolen.  Plus I had them rig it so it'll give whoever stole it a nasty rash on their face that will cause small children to scream in terror and adults to vomit at the sight of it.  So, have fun with that.

Email ThisBlogThis!Share to TwitterShare to FacebookShare to Pinterest
Labels: Flying, Me me me, Rant

What I've been up to... More of The Grind

More of the same today.  I am seeing improvement in pick ups, hovering, and approaches.  So, H'Ray.

The one new thing today was hover autorotations. Which are interesting.

Basically, just roll the power out from a stable hover around 5 ft. then it's pedal, pause, pull.

Email ThisBlogThis!Share to TwitterShare to FacebookShare to Pinterest
Labels: Flying, Me me me
Newer Posts Older Posts Home
Subscribe to: Posts (Atom)