I actually bought this like a couple of months ago, but one thing and another and work and I'm just getting it home today.  They guy I bought it from swore up and down it was chambered in .30-06, and then said it was made in 1903.  Which didn't add up to me.

The serial number checks for a 1903 birthday, so.... confusion.  So, when I was able to pick it up from my FFL, I took one look at it and took it to my gunsmith to have a chamber cast made to find out what caliber it actually was.

So, chamber mold seemed to be the smart thing to do.

Anyway.  I'm pretty sure the guy didn't know what he had.  Considering the three holes on the side of the receiver aren't just cut willy nilly like he thought.  They were the saddle ring hole and two holes tapped for a Lyman sight system.  Score! 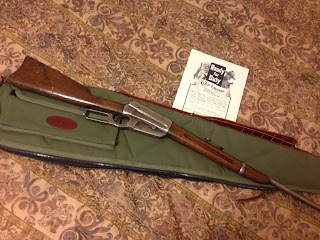 The ad for Colt is just there because I was so excited to finally be taking pics, I forgot to move it.
Posted by aepilot_jim at 17:10

Of course, this means I'll have to start collection Winchester (and other) lever guns.... dammit!

That was a heck of a find. I'm not jealous. No, really I'm not. That shade of green in my face is because of last night's supper.

The only way I'd hate you more is if it were a Russian contract one in 7.62x54R.

I am very jealous. I've wanted a long gun in .30-40 Krag for a long time. And to get a Lever action one is just icing on the cake. Will you be using it for a deer gun?

Probably not, GreyLocke. My goto hunting rifle is a .308. This lever gun is just a nice looking gun. But I am headed to the range to day with it and the Krag-Jorgenson to shoot some .30-40.