For one reason or another it's taken me a bit longer to do this build than usual.  But it's finally together.

Specifications:  It's an AR-15 built up using AeroPrecision's upper and lower receivers.  I have to say that these are a very snug fit with no play at all between the two receivers.  In the lower I used a Rock River National Match 2 stage trigger,wolf springs in the buffer and non-trigger related springs.  All the pins, roll pins and internals came from a DPMS kit.  But, considering that everyone gets their fiddly pieces from the same couple of manufacturers, one kit is as good an another.  Although I did get a KNS anti-roll pin kit for the trigger and hammer pins.

I put MagPul's extended trigger guard, BAD lever and the UBR buttstock on it.  In fact it's all MagPul furniture, including their MIAD grip and MOE Midlength Hand Guard.  I'm waiting on a rail to arrive and when it does I'll have MagPul's AFG attached to it.

The upper, as I said was AeroPrecision, is an A3 flat top with M4 feed ramps.  On to this I stuck a BCM stainless steel 16" midlength barrel.  I am also using BCM's GunFighter charging handle.  The BCG is an Adam's Arms made for their piston kit.  Which also means that the gas block and piston, piston rod, etc. are all from the kit.  On the front of all this is AAG's 51T flash hider.  And yes, I do plan to someday put a can on it.  I'm just waiting on paperwork and money for that.

On top is a Trijicon ACOG T31H 4x scope.  I went with the horseshoe reticle for a couple of reasons.  It tends to cover up less of the target and, for me, it's a little easier to do the hold under/over for range shots.

On the dust cover you can see I engraved the model name of this rifle. Yes folks, this is the TACTICAL SCHMOO rifle (TM pending).

Below are a few quick snaps I took of it. With some closeups of the various parts. There were a couple of parts that needed to have the loktite set on, so I'll put up a range report for it on Wednesday.

Now before the flames start, this AR build was all about "because I can". So, why the piston? Because I can. Why all MagPul? Because I can.  Why the ACOG? Because I can.  Do you see a pattern developing here?  So, when you start screaming at me in the comments about how a piston will never run right or that trigger teh suxxors or whatever bee you have buzzing in your bonnet.  My reply to you will be... because I could.

I only have one more project gun on the books right now.  And I'm expecting the last few part to finish it to show up in the mail this week.  So, keep your eyes open for another build report sometime this month or the next.

p.s. The last pic is the parts I have for that last build. 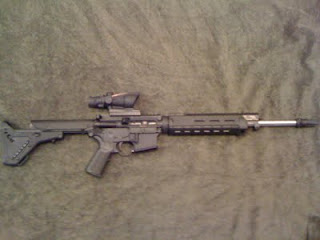 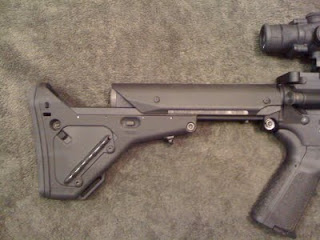 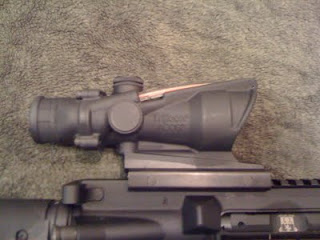 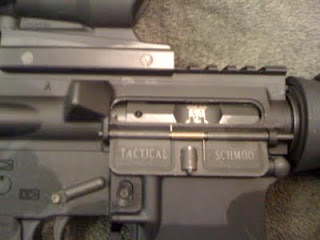 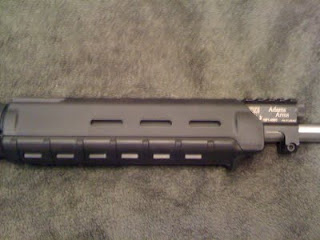 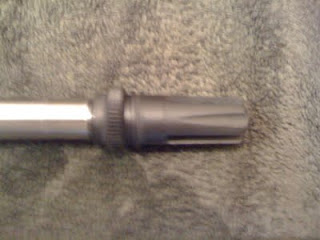 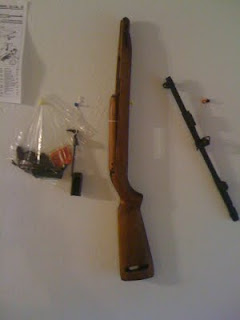 Email ThisBlogThis!Share to TwitterShare to FacebookShare to Pinterest
Labels: geekery, guns, Me me me

Very nice. Let us know how it shoots.

I'm actually more interested in the next project... Whatcha got in mind for the M1 Carb?

(WV: birier: The patch Br'er rabbit would run off to when things got dicey!)

While I am not a huge fan of piston ARs, that is a pretty cool build. The only thing I'd do different is put a free floating tube on the front of it, rather than the MOE front end. But the MOE is still cool.

danno: All I want to do is put it together. It's getting impossible to find a shooter M1 Carbine. They're either basket cases or museum pieces. I got a screaming deal on enough internals for almost 2 carbines, with a bit of luck I can find two good receivers and I'll have 2 carbines that I wont mind shooting for under a grand.

JP: I thought about going freefloat with the handguard, but all the ones that were piston compatible were very pricey. Then I started putting MagPul stuff on it and I thought I might as well go 100% MagPul. This was about 6 months before they put out their midlength handguard and I got lucky they made it piston compatible. The original carbine handguard wasn't.